The Catholic University of Malawi (CUNIMA) has awarded diplomas and degrees to 530 students at their 17th congregation held at the University’s main in Chiradzulu district last week.

Speaking at the graduation ceremony, Vice Chancellor of the University, Fr. Dr.  George Buleya said the University has made strides in adding up the numbers graduates each year since 2010.

Father Buleya added that the University plans to extend its Campus to all the three regions of the country as a way ensuring access to quality education that the university offers in Malawi. 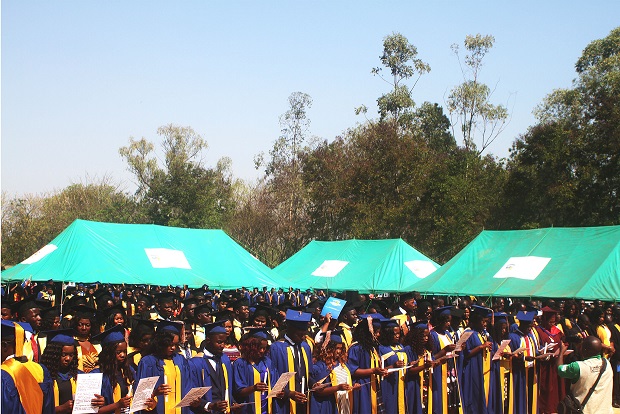 Some of the graduates from Catholic University of Malawi, this year

Concurring with Father Buleya, Chancellor of the University, His Grace Thomas Luke Msusa said the CUNIMA is to continue taking holistic approach on education in the country through offering quality education that can transform the nation.

Guest of honour at the graduation ceremony, Vice Chancellor for UNICAF University Malawi, Professor Joseph Kuthemba Mwale advised the graduates to be agents of change to the nation and apply the knowledge they have tapped at the university for the past years they have been into studies.

He further advised the graduates to resist from acts of violence the country has witnessed after the general elections held in the country in May this year.

Before awarding the academic qualification papers to 530 students, Bishop Desmond Tambala of the Diocese of Zomba led the Eucharistic celebration, joined by the Chancellor and Bishop Martin Tumbula of the diocese of Karonga who is also the Chair of Council of the university.

CUNIMA, was established in 2006 with few programs offered to the students from Malawi and across borders. In the past years, the university has added new programs to meet the demand of qualified people in some sectors the recent being the nursing and midwifery that produced first graduates at the 17th congregation.

The 17th congregation at CUNIMA was held under the theme, “Gaudium de Veritate” (The Joy about the truth).