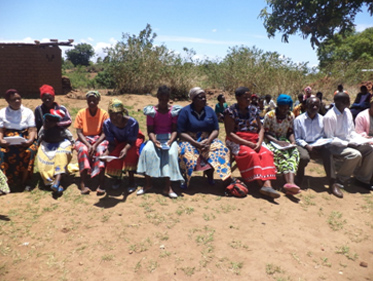 Members of village tribunals during an orientation at Naphiyo school, T/A Bvumbwe, Thyolo 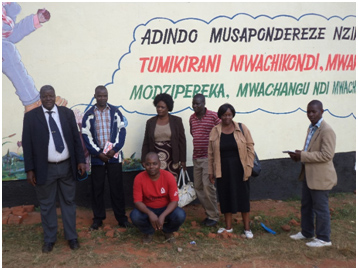 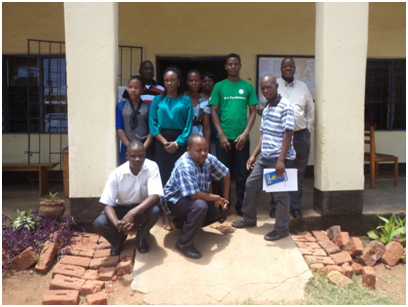 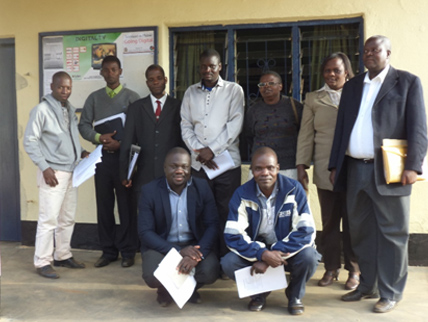 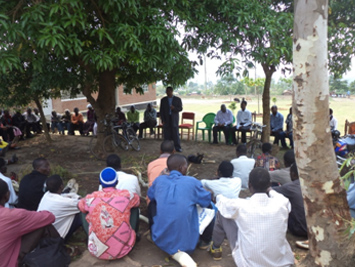 T/A Ngolongoliwa of Thyolo addressing village tribunals of his area during an orientation cause organised by CCJP Blantyre with funding from DFID. 17th November, 2015. 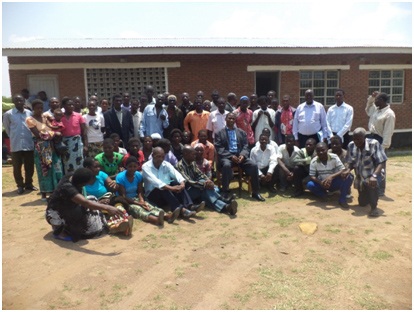 T/A Ngolongoliwa pause with village tribunals during an orientation at Mtundawosema headquarters on 17th November, 2015 Thyolo 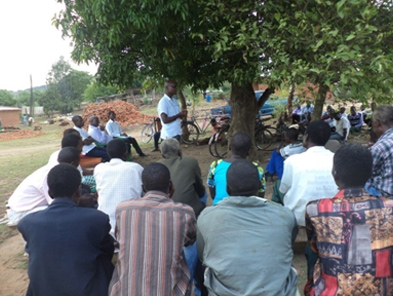 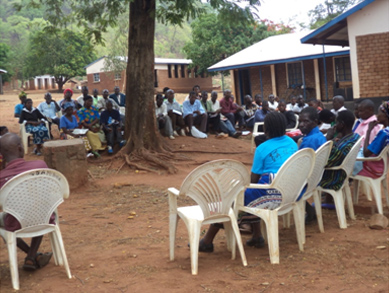 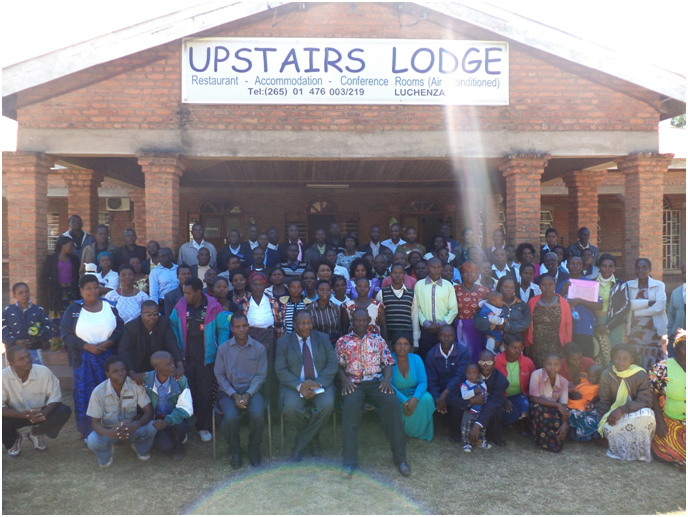 CATHOLIC COMMISSION FOR JUSTICE AND PEACE

The Catholic Commission for Justice and Peace (CCJP) of the Archdiocese of Blantyre was founded in Blantyre, Malawi in 1995.  It was established in order to contribute to the political, economic and social progress and development of Malawi, by consolidating democracy, promoting human rights and good political and economic governance through increased community participation.  In 1994, there was a change in the political focusing on governance.  Thus, the Catholic Church of Malawi took the opportunity to found the CCJP.  The Church had successfully started organizations of this kind in neighbouring countries of Zimbabwe and Zambia.  The CCJP is a faith-based NGO aimed at the promotion of the common good.  Its activities target all people without discrimination on the basis of faith/religious, political and ethnic affiliation.

The CCJP was managed and staffed by volunteers for the first two years of its existence.  By 1997, enough money had been raised to hire the first paid staff.  Currently the organization has 6 paid staff members and over 8,000 trained volunteers in its network.  These volunteers include CCJP Animators, Community Based Paralegals, Community Based Educators, CCJP Deanery and Parish Committee members, Gender Awareness Youth Club members, and community action groups. The staff, or secretariat, is comprised of a Archdiocesan Secretary, Finance Officer, Program Manager, Monitoring and Evaluation Officer, Administrative Assistant and a Driver. There are also 4 District Paralegal Officers who manage the four paralegal clinics. These are party time staff members.

The CCJP serves the 7 most densely populated administrative districts in Malawi namely: Blantyre, Thyolo, Mulanje, Phalombe, Chiradzulu, Mwanza and Neno..  The organization serves roughly 2.5 million people.  Funding for the CCJP is primarily from international organizations and other governments, with a small portion coming from within the country.

A society where all people fully enjoy peace, justice and human rights

To promote justice, peace and human rights for all citizens through, civic education, advocacy, empowerment, capacity building, environmental justice, research and documentation in accordance with the gospel and the social teaching of the Catholic Church .

ii.    Integrity of creation from conception and stewardship

vii. Liberation and preferential option for the poor

The CCJP sees that there are a number of major problems in Malawi some of which are; bad governance, corruption, poverty, HIV/AIDS, Gender Inequality and the violation of human rights.  Examples of this include property grabbing, domestic violence, gender inequality and unfair labour practices, bad cultural practices.  Another example is the inaccessibility of justice structures, such as the courts.

Lack of knowledge among the citizens, high illiteracy, and the breakdown of social security structures within communities are the primary reasons for these development problems.

Also the judicial system in the country is very slow and expensive for the poor who represent the majority of the population.  The Malawian society is mostly patriarchal and has for a long time promoted male domination.

The CCJP has responded to these problems by increasing the awareness of its constituents about their rights and responsibilities.  CCJP has in the past two years implemented the following: -

CCJP has gone a step further to establish Paralegal Clinicswhere complaints received by the community based paralegals are taken to. There four such clinics situated as follows: Phalombe, Chisitu, Thyolo and Zalewa (Lisungwi Parish)-Neno districts. The secretariat also operates as a fifth Paralegal clinic, while attending cases from all the other clinics. There is also one Satellite Paralegal clinic in Mwanza.

(ii)     HIV/AIDS Rights Education – This programme trained 225 community volunteers to teach the community about human rights in relation to HIV/AIDS.  They teach that everyone is equal whether or not they are HIV positive.  They discourage all forms of stigma and discrimination that is often associated with HIV/AIDS patients.

They also talk about positive behaviour change in the prevention of HIV/AIDS and provide referrals for HIV/AIDS patients to relevant health institutions.

(iii)    Integrated Justice and Peace – This programme trained 550 volunteers in the basic concepts of human rights, gender, and empowerment.  Volunteer training is also conducted on the economic rights of men and women, such as the right to earn money, join trade unions, and own property.

These trained volunteers enter the community and teach people about human and economic rights.  They also encourage farmers to form cooperatives in order to increase bargaining power for their produce.

These are in form of T/shirts, fliers, leaflets and Press Releases/Statements in the print and electronic media.  They are also read in churches and communities and are mostly done in the local language while others are in English.

This advocacy is a continuous process and aims at disseminating correct information so that Malawians especially the grassroots are able to make informed choices; politically, economically, socially and culturally.  It targets all sectors of the population with emphasis on the rural masses who constitute over 80% of the Malawian population.  Furthermore, CCJP strongly advocates for respect of human rights and increased civic participation in decision making processes.

Other projects and programs are:

(x)         Advocacy Against Gender Based Violence

Research and Human rights Monitoring is on-going project of the CCJP which utilises various religious and community structures in getting information from the ground. The results of some of the research work are the basis for a number of projects that the Commission has been implementing in the past and at present.  Other findings of the research are incorporated into advocacy programmes.

Because CCJP acts at the local and national level, it believes in mobilisation and empowerment of volunteers to effect change.  Thus, the development theory that CCJP utilises is the “Alternative Development theory”.  This theory emphasises participation, with regard for local grassroots groups and social movements.  It promotes equality and justice in economic, political and social spheres.  For instance, all of the above projects are implemented with the maximum support of the trained volunteers, based at the community level.

The CCJP has formed networks and joined coalitions with other NGOs doing similar work.

As an institution, CCJP has tried to maintain trust and confidence among citizens, as well as transparency and accountability to its donors.  The organisation’s legitimacy stems from its religious affiliation.   CCJP produces reports depending on donor requirements, along with an annual report, annual evaluation of staff.

Using the well established financial systems, CCJP hires external evaluators (CPA) to produce an annual financial audit.  The existence of Board of Directors, promotes accountability to the staff and programs.  The Board of Directors meets quarterly and is also provided with a progress report.

CCJP has seven current strategies. These are:

·        Collection of facts through research and results of inquiries relating to Justice and Peace in the country.

·        Foster old and form new partnerships with the church, NGOs and donors to build organisational capacity.

·        Implement gender policies and programs that promote equal rights of men and women.

(f)      Membership to Catholic Commission for Justice and Peace

Membership to the CCJP is open to everybody regardless of religious, political or ethic affiliations.

CCJP has three main levels of operations, namely, the Board of Governors, Secretariat (Staff) and community volunteers.  The Board is responsible for policy formulation and providing guidance; the secretariat is for the day-to-day operations, including implementation of the programs and projects of the commission.  Thirdly, there is a group of volunteers which forms the largest group within the CCJP structures.  Aspirants to join CCJP undergo a justice and peace formation course to enable them understand the vision, mission and values of the CCJP.

After the orientation they become registered members of the commission and can aspire for any position within the CCJP structures.  Currently, the commission has over 5,000 committed community volunteers and they are responsible for all the community work of the CCJP.  The majority of the volunteers are men, followed by women and the youth.  They live in their local communities and use their own time in doing justice and peace work.  Among the volunteers themselves they choose leaders at district and community levels to form CCJP Committees.  The committees are answerable to the CCJP secretariat.  This allows information flow from the secretariat down to the grassroots.  Currently there are seven district committees working on voluntary and part-time basis.

The volunteers do not form their own separate community groups distinct from the CCJP structures but are free to join other community groups, CBOs and NGOs provided they are able to distinguish the various roles and responsibilities within the community.

These committees are below the other established church and community structures such as the traditional authorities.  They remain members of the CCJP as long as they wish, provided they are able to follow the Constitution and Code of Conduct of the Commission and volunteers respectively.  They are free to leave the commission anytime however they are supposed to inform other members of their decision of purposes of records and accountability.